After completing these laboratory activities, you should understand / be able to:

Reproduction is a shared characteristic of all living things from bacteria to blue whales. Most animals reproduce sexually, and have separate male and female genders. The production of egg and sperm cells via meiosis– those containing half the usual number of chromosomes (n, haploid) is a necessary precursor to sexual reproduction. The fusion of these haploid cells results in a genetically unique diploid (2n) organism called a zygote, which then divides by mitosis to grow and differentiate into a fully formed offspring.

We will cover the male anatomy first since the remainder of the lab activity will focus on female anatomy, fertilization & implantation, offspring development, and pregnancy.

*Instructions**Check the boxes as you complete each exercise

____ Observe the male pelvis model, find the numbers/letters indicated on the worksheet at the end of this lab activity.

The primary male sexual organs are the testes and penis which produce and deliver sperm to the female reproductive tract, respectively. The testes are also responsible for the production of male hormones called androgens. After production in the testes, sperm passes through a series of structures which help it to become fully functional. Accessory glands add important substances which facilitate the sperm to ultimately reaching the egg; collectively the sperm plus these substances is known as semen.

After initial formation in the testes, sperm pass through the following structures, in order:

The epididymis is a whitish mass of tightly coiled tubes against the testicles, acts as a maturation and storage for sperm before they pass into the vas deferens. The vas deferens is a thin tube approximately 12” long that carries the sperm from the epididymis to ejaculatory duct. From the ejaculatory duct, the sperm move through the urethra until their exit from the body. Sperm that do not leave via ejaculation are reabsorbed by the body.

*What is the path of sperm in the male from where it forms to where it leaves the body?

____ Observe the female pelvis model, find all numbers/letters indicated on the worksheet at the end of this lab activity.

Major reproductive organs of the female are the ovaries, uterus, and vagina. The female reproductive system involves hormonal communication between key organs, particularly the ovaries and uterus, whose basic functions are to produce the egg, and house the developing embryo, respectively. 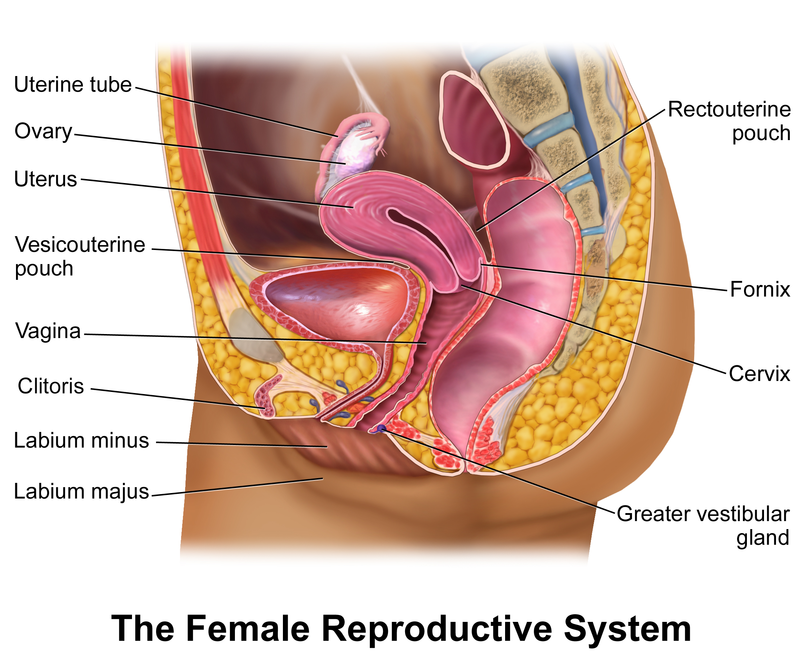 The ovaries are paired and produce both eggs and sex hormones (e.g. estrogen); they are the functional equivalent of the male testes. Ovaries are about the size of a walnut, and at birth contain approximately two million ova (eggs) each. During nearly every menstrual cycle, one (or more) eggs mature and are released during ovulation from the follicle within the ovary, which also releases estrogen. Upon release, the egg passes into a narrow tube known as the oviduct (uterine tube) which is lined with cilia that sweep the egg towards the uterus.

The uterus is fist-sized and thick smooth muscle that contracts during labor & childbirth. The interior lining of the uterus is the endometrium, which thickens during the menstrual cycle in anticipation of housing the developing offspring. The lowermost portion of the uterus narrows into an opening known as the cervix.

The vagina is a muscular organ that serves as a passageway into and out of the uterus. Externally, the female reproductive anatomy (known as the vulva) includes the labia major, labia minor, and clitoris.

____ Observe the fertilization model, find the locations of fertilization & implantation, and trace the path of egg and sperm in the female.

Fertilization & Implantation occur in separate locations and at different times; implantation normally occurs about 8 days post-fertilization. Fertilization (conception) is the process by which the nuclei of a single-celled egg and sperm fuse to form a zygote. Fertilization normally occurs in the oviduct (uterine tube), where the egg travels from the ovary. To reach the egg, sperm cells must travel a distance approximately 100,000 times their body length, which is equivalent to a person running a 110 mile race! Predictably, not all sperm reach the egg, and the first ones that do, generally do not fertilize the egg, since they must penetrate the outer covering of the egg; a single sperm that follows ultimately fuses with the nuclei of the egg to form the zygote.

The zygote is swept by cilia that line the oviduct toward the uterus. As it slowly moves, it undergoes successive rounds of mitosis that build the single cell into a hollow ball of ~100 cells called a blastocyst. After approximately one week, it will reach the uterus where implantation occurs in the blood vessel-rich tissue of the uterus, the endometrium. On occasion, the blastocyst will not reach the uterus and may start to implant on the oviduct. If so, the pregnancy is inviable as this location is not large enough to allow for embryo growth – this is known as an ectopic or tubal pregnancy. An egg, even if fertilized, may also fail to implant in the uterus and then leaves the body during menstruation. 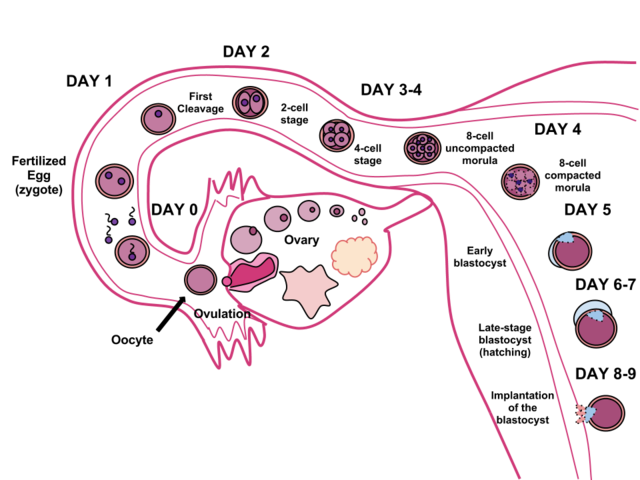 Locations of fertilization and implantation

*What is the path of the egg from where it forms to where it leaves the body if not fertilized?

*What is the path of the sperm from where it enters the female to where it fertilizes the egg?

If the blastocyst successfully implants into the endometrium and continues with mitosis and development, a predictable series of structures form. Three embryonic tissue (or germ) layers (endoderm, mesoderm, ectoderm) are established, and the organ level of development continues until all organs have formed. The first organs to develop are the 1) heart, 2) brain & neural tube, and 3) digestive tract.

____ Examine the early stages of development in the chick embryos under the microscopes. On your worksheet, sketch the stage(s) of the chick embryo and identify/label at least 2 structures.

Early structures that are visibly forming include somites (blocks of developing muscle tissue), head fold, notochord (below surface), neural groove and fold, and surface ectoderm. See the figure next to the microscope for complete details.

Many organs are now more clearly visible: the heart is now contracting and circulating blood; the brain has several distinct regions (forebrain, midbrain, hindbrain); the eye has a developing lens; the somites enlarge; the neural tube is clearly visible. 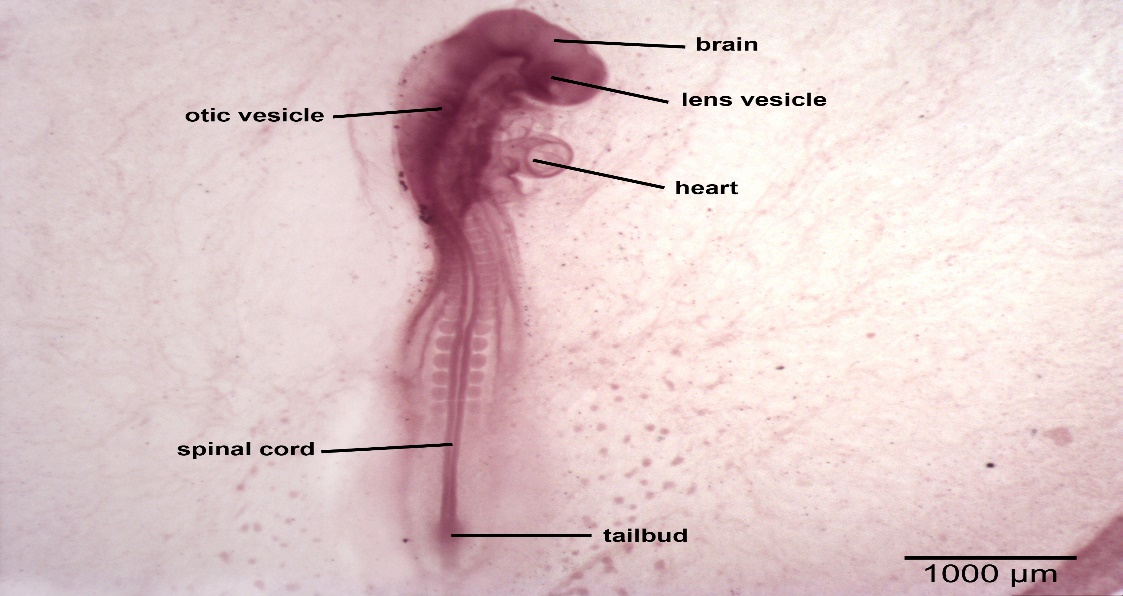 In addition to the clearly visible heart, eye, brain, and other major organs, a wingbud and hindlimb bud have noticeably formed. The brain has continued to differentiate, while the neural tube has closed along the length of the body—it is now called the spinal cord. 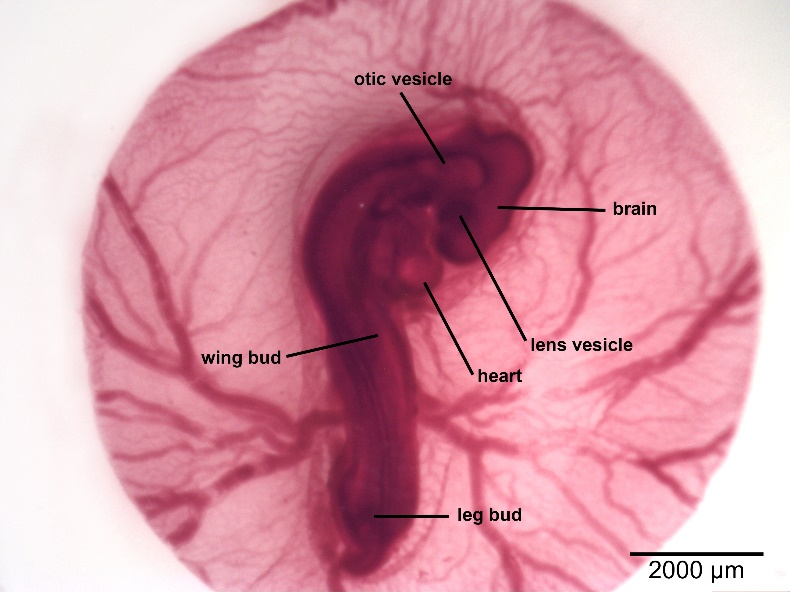 Tissue differentiation has continued to produce visibly distinct organs. The amnion noticeably surrounds the embryo and the number of somites has increased.

____ Observe & measure the embryo/fetal models on the back table (from 4 wks to 6 mo. gestation).

Normal human development requires a full nine months (40 weeks) of gestation to support a fully functioning offspring. Embryo development includes the first eight weeks (two months). By the end of development, all organs have initially formed, but are not functional enough to support independent life. During fetal development (seven months), organs mature and become functional; dramatic weight gain also occurs. The offspring increases greatly from <1” at 4 weeks to about 20” at 38 weeks. It will double in weight from about 4 to 8 pounds between months 7 and 9.

The placenta is a large, blood vessel-rich organ containing tissues from both mom and offspring. It serves as an interface that allows for exchange of nutrients and wastes, while keeping mom and offspring isolated from each other. Blood is not exchanged between mom—offspring, as their bodies may contain incompatible differences (including blood type) between their immune systems.

* At the placenta, blood IS / IS NOT exchanged between mother and fetus? 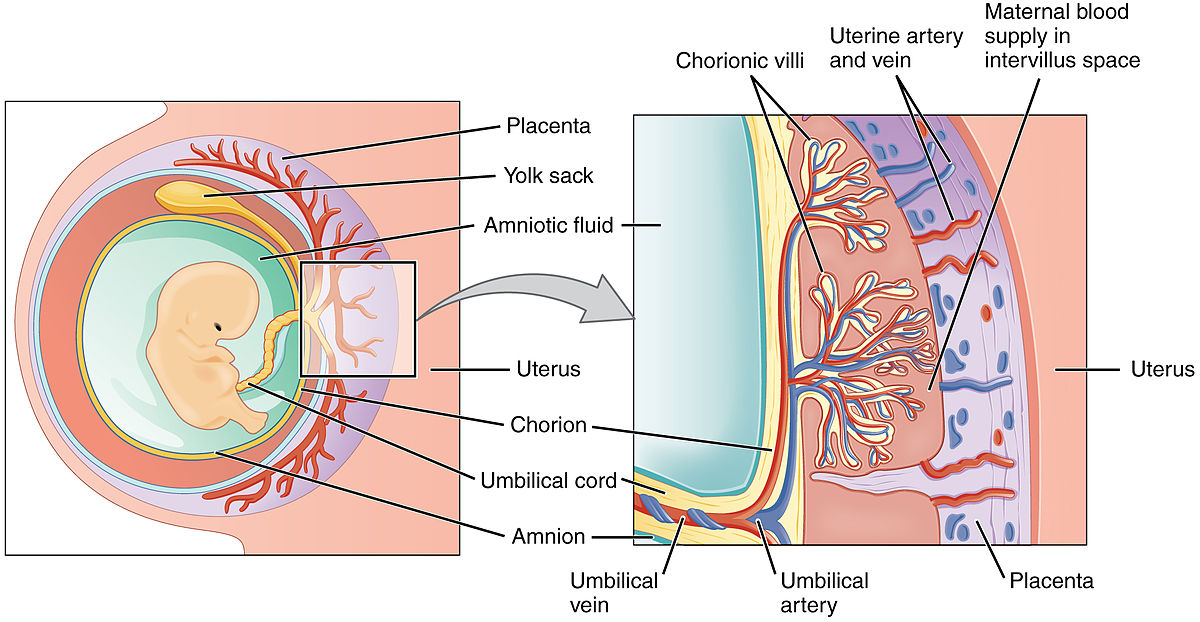 Pregnancy, also known as gestation, lasts approximately 267 days from conception to birth (280 days if calculated from the last menstrual period to childbirth). Pregnancy can be divided into trimesters, each is approximately three months long. The first trimester has the highest possibility of miscarriage (natural death of embryo or fetus). During the second trimester, fetal movements may be felt. At 28 weeks, more than 90% of babies can survive outside of the uterus if provided with high-quality medical care. The third trimester is marked by rapid weight gain.

Major anatomical, metabolic, and physiological changes occur in the mother, including considerable weight gain occurs during a normal pregnancy. As pregnancy progresses, the uterus pushed into the abdominal cavity, exerting pressure on many organs, collecting pushing up against the diaphragm. Physiological changes may include morning sickness, which is thought to be related to elevated hormone levels. 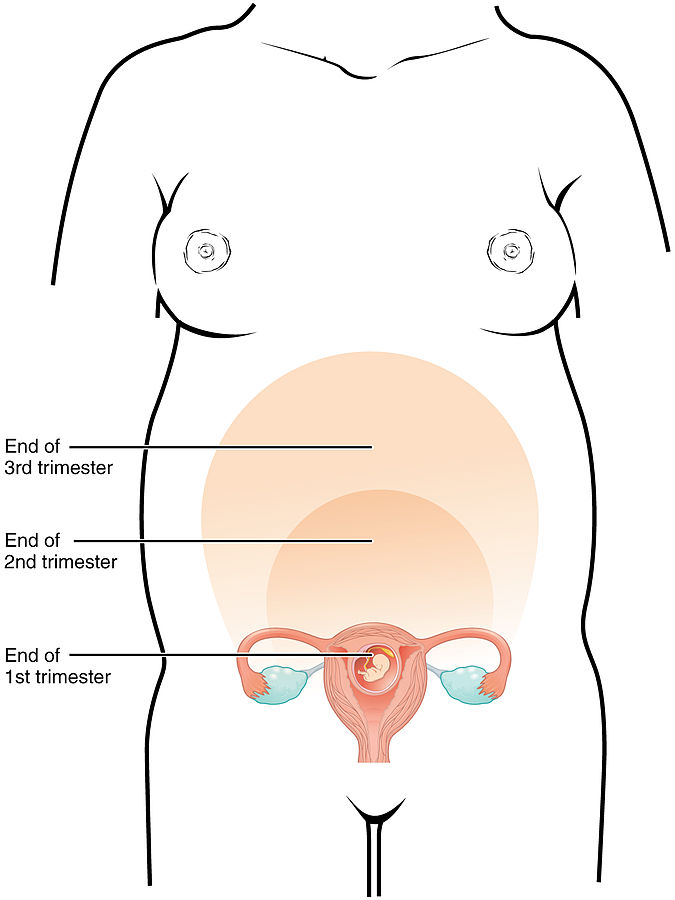 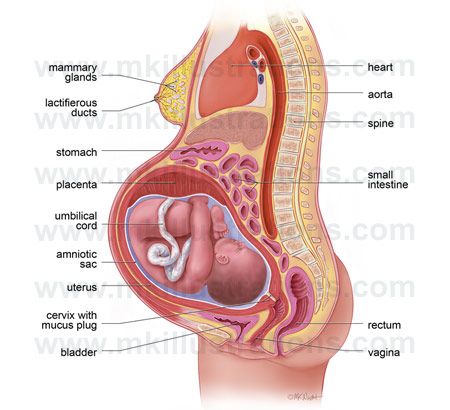 ___ Observe the fetal circulatory system model and find the oval opening and the arterial duct.

Two structures in the fetal heart are present that allow blood to bypass a non-utilized organ in the baby—the lungs. In the heart, the oval opening (foramen ovale) between the right atrium and left atrium shunts blood away from the lungs. Also, the arterial duct (ductus arteriosus) connects two blood vessels, the pulmonary trunk and the aorta, to again shunt blood away from the lungs. These structures close after birth in normal development: the oval opening becomes the fossa ovalis, while the arterial duct becomes the ligmentum arteriosum. 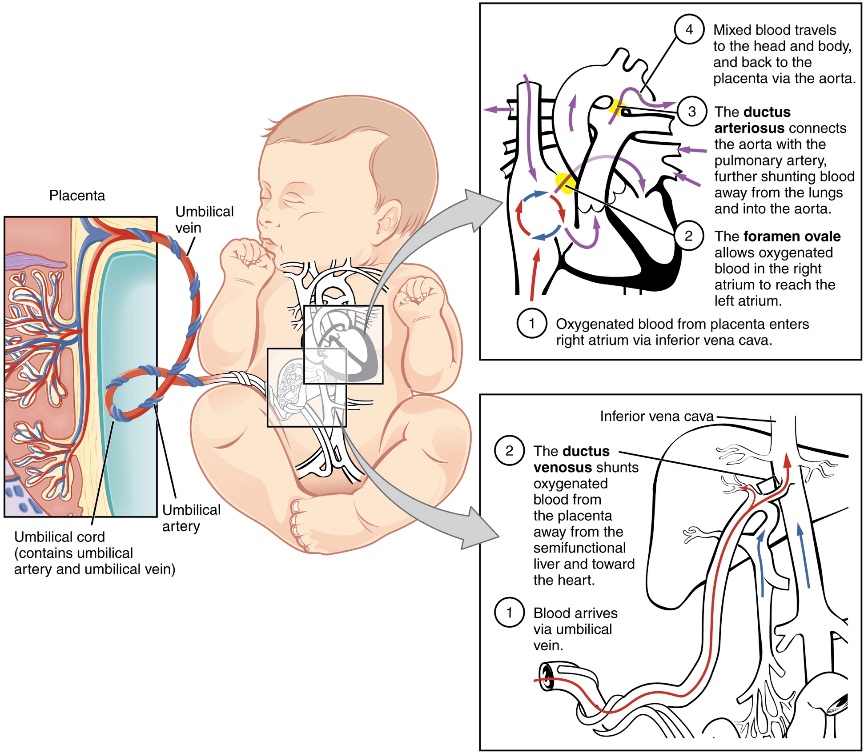 ____ Find the umbilical arteries and vein in the model. 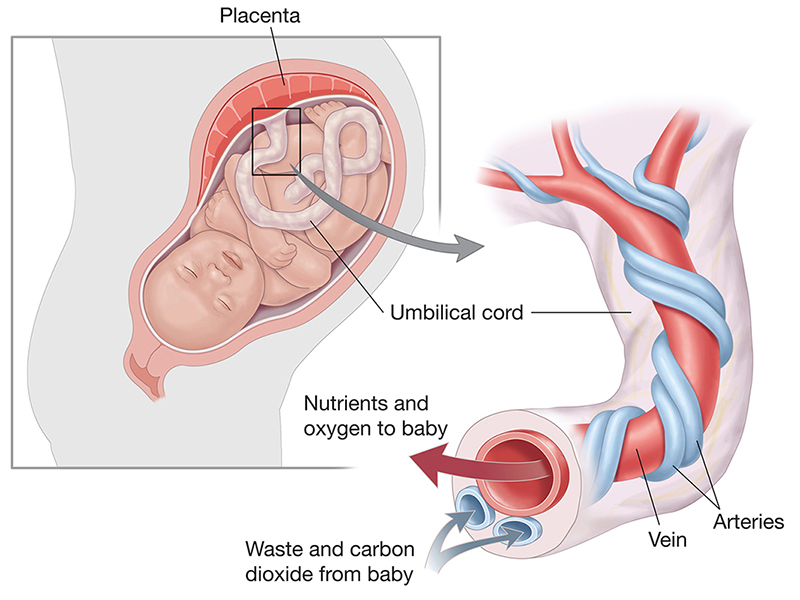 1-2. Number the following structures of the reproductive system on the male & female models on your lab table

5. Using the pregnancy model at your table, which maternal organs are most compacted by the fetus?

Go to the back counter:

Go to the front cart:

10. Oval opening (foramen ovale): an opening between which two chambers of the heart? (see model)

Biology 102 Laboratory Manual: Biology of Plants and Animals by Jeffrey Ray and Jason Jones is licensed under a Creative Commons Attribution 4.0 International License, except where otherwise noted.