After completing these laboratory activities, you should understand/be able to:

In today’s lab, you will dissect and study the anatomy of the fetal pig^ as a surrogate for the human. The fetal pig is exceedingly similar to the internal human anatomy in multiple aspects. While performing the dissection, keep in mind these structures are present in the same location and serve the same basic function in humans. Be sure to compare the anatomical structures in the pig with the human torso model.

^These pigs were not killed for the purposes of being dissected, but are the by-product of the food processing (pork) industry and would be otherwise be used as fertilizer or thrown away if not used for dissection purposes.

*Instructions*     Check off each structure on the worksheet as you find it.*

Work in groups of 2-3. Wear gloves and a disposable apron if you are dissecting or assisting the “surgeon.” If you are not participating, it is your job to read and instruct the surgeon on the proper steps and to make sure all activities are completed. The pigs will be washed, but after opening the body cavity, it will be useful to rinse fluids out of the cavity to better observe internal anatomy. Have paper towels ready and also use Febreze™ to spray the inside of the pig to remove any smell-use liberally. Ask your instructor for assistance.

All Mammals possess mammary glands and hair. Both pigs and humans are placental mammals, and development occurs within the uterus (in utero). An umbilical cord is the pipeline between the fetus and the placenta. At this interface, oxygen and nutrients are exchanged for carbon dioxide and wastes. Within the umbilical cord, one umbilical vein carries nutrients to the fetus while two umbilical arteries carry wastes away. Pigs and humans are also both tetrapods–four-limbed vertebrates. Pigs actually walk on their toes (their toenails are hooves). Notice the bones of the ankle are halfway up the hind leg.

*Securing the Pig to the Dissection Pan*

1. Place the pig on its back in the pan. Tie a string around one front leg, then bring the string underneath the pan, and tie the string to the other front leg. Do not tighten the knot until you have removed any slack from the string or the pig will not stay in place.

2. Repeat this process for the back legs- tie a string around one back leg, bring the string underneath the pan, and then tie the string to the other hind leg. This will hold the pig with all four limbs extended.

*Check the boxes as you complete each exercise

1. Locate the umbilical cord arising from what will become the “belly button.”

2. Cut the umbilical cord near the end and observe the three tubes within it – 2 umbilical arteries and 1 umbilical vein (use the blunt probe to find these).

1. Locate and count the number of small nipples, the external openings of the mammary glands. Nipples are not an indication of gender, since both males and females possess them^. In Mammals, there are generally two mammary glands for each offspring (on average).

^Explanation: During early embryo development, the nipples start to form before gender is expressed; this explains why both female and male mammals have nipples and is known as a developmental constraint.

1. Locate the anus, the opening of the digestive system, under the tail.

3. If absent, look below the umbilical cord and locate the urogenital opening. If present, your pig is male. Below this urogenital opening and hidden under the skin is the penis, which is held inside the body. Depending on the size of your pig, a scrotal sac may be developing near the anus. Within this sac, are the testes.

4. Find another group nearby who has a pig of the other gender and examine it – you are responsible for identifying pigs of either gender.

Within the oral cavity (mouth), notice the teeth (watch out for sharp canines!) and muscular tongue. To the back of the oral cavity is the pharynx, which contains three openings: glottis, esophagus, and nasopharynx. The glottis is the opening that leads to the trachea (“windpipe”). The esophagus is dorsal (towards the back) to the trachea and leads to the stomach. The nasopharynx leads up to the nasal passages.

1. To expose the pharynx, use the scalpel to carefully cut back from the corner of the mouth 1” or more through the thick muscle and ligaments on each side to separate the upper and lower jaws.

2. Apply pressure with your hands to separate (tear) the tissues so the mouth stays open.

3. Locate the hard palate (ridged roof) and soft palate (smooth), which is posterior (to the back of) it. Notice the lack of a uvula (downward extension of soft palate) in the pig (humans have a uvula).

4. Continue to dislocate the jaws using your hands to expose the epiglottis, a flap of elastic tissue that covers the glottis (opening to trachea) when swallowing to prevent choking. 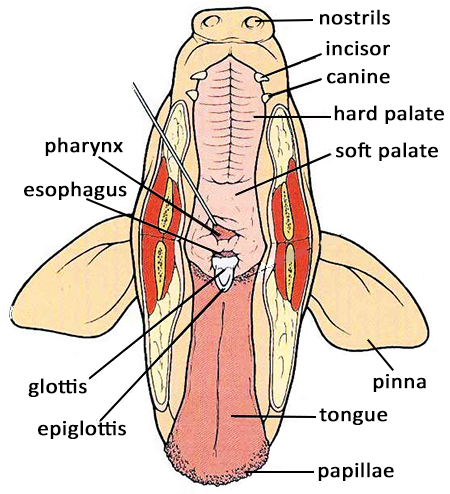 5. Insert a blunt probe into the glottis to show it leads to the trachea. Insert the probe into the back of the pharynx into the nearby opening- this is the esophagus.

1. Make a series of careful incisions with the scalpel to expose the internal organs. Do not make deep, plunging cuts, instead make shallow, but firm cuts to penetrate the skin and muscle, but NOT the organs. Try not to cut the diaphragm. Better to make several shallow cuts into skin and muscle than one deep cut.

3. Starting at the hair of the chin, cut down to near the diaphragm. The thick sternum must be cut through in the chest. Next, make two lateral cuts, one above the forelimbs, one below.

4. Cut posteriorly from the diaphragm to near the umbilical cord.

6. Make a lateral cut posterior to (below) the diaphragm.

7. Make two cuts, one on each side of the umbilical cord flap, just anterior to (in front of) the hindlegs.

9. Leaving your pig on the tray, take it to the sink and rinse out the body cavity after it is cut open. Spray the organs generously with Febreze™ to minimize odor.

10. If needed, use dissecting pins to hold structures open or in place. Suction out any excess fluids with your pipette. 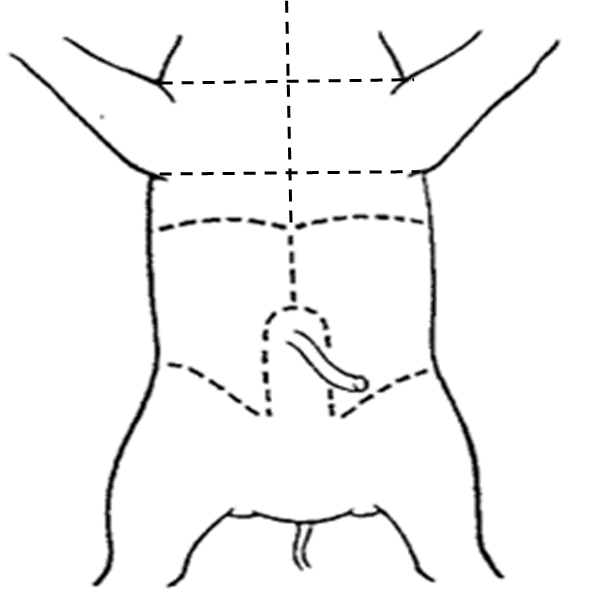 1. Use the scalpel and blunt probe to separate the many muscles and ligaments of the neck from other tissues. Be careful not to destroy the thyroid, which sits atop the trachea. In the fetal stage, the thymus, which looks like fat globs, is extensive in the cervical region and into the thoracic (chest) region.

2. Separate tissues to expose the trachea (windpipe), which looks like an earthworm, due to its cartilage rings. The thyroid is a small, butterfly-shaped organ sitting atop the trachea (often damaged). It is easier to find in the torso model.

3. Use the blunt probe to find & hook the esophagus, which is immediately dorsal to (behind) the trachea. The esophagus looks like a flat tube, which stretches to accommodate food and water as they pass to the stomach.

4. At the superior end of the trachea, find the whitish, enlarged larynx (“voicebox”) composed of hyaline cartilage.

5. Trace the trachea to the bronchi and then the lungs of the thoracic cavity.

The major organs of the thoracic cavity include the heart and lungs. Notice how the heart is slightly offset to the left resulting in asymmetry of the two lungs in terms of size and number of lobes (4 R, 3L). Many blood vessels, including the aorta and vena cava, serve the heart.

1. Notice the compartments of each lung and the heart and the membranes covering them, these minimize friction and isolate/protect these organs.

2. Find the atria of the heart which are small, lighter-colored flaps atop the heart. Find the aorta.

3. Find the 4 right and 3 left lobes of the lungs. Find the left and right bronchi branching from the trachea.

4. Notice the diaphragm inferior to the thoracic cavity. 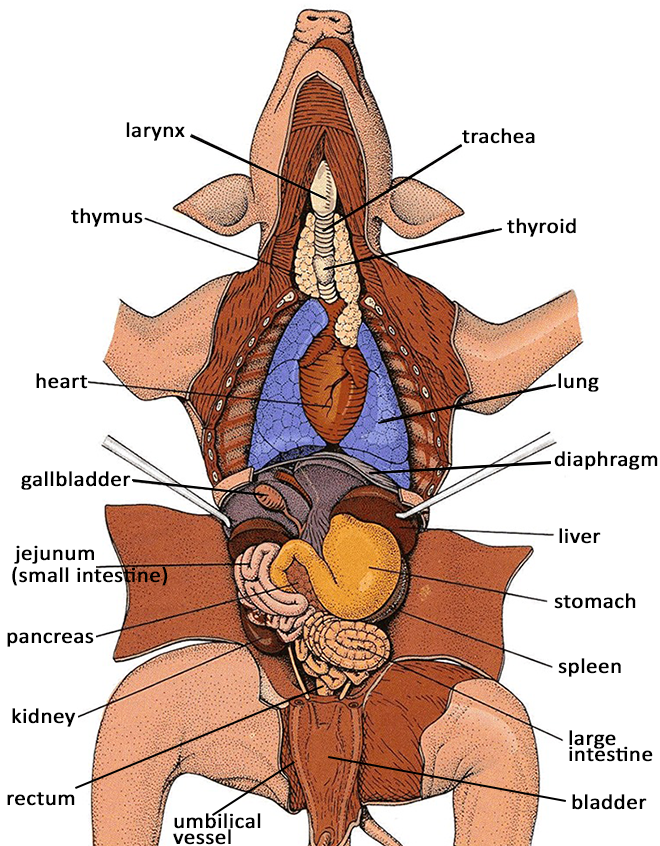 1. Find the liver, which fills the upper right quadrant. The liver has various functions including storing vitamins & minerals, recycling red blood cells, producing blood proteins, and storing/releasing glucose to maintain blood glucose levels. Find the greenish gallbladder on the underside of the liver. The gallbladder stores the bile produced by the liver.

2. Locate the stomach and spleen in the upper left quadrant. The stomach is a J-shaped organ that looks like a deflated ball in the pig. The spleen looks like a long skinny tongue that is held to the stomach by mesentery. The spleen is bean-shaped in humans; it functions in immunity and red blood cell storage.

3. Beneath the stomach, find the pancreas, which is poorly defined, and looks like a small collection of tapioca or corn meal. The pancreas produces digestive enzymes and hormones (insulin/glucagon) for blood glucose homeostasis.

7. Push the intestines to the side, and locate both kidneys in the dorsal (back) side of the abdominal cavity. The kidneys filter wastes from the blood, which are carried to the bladder via the ureters, two dull colored tubes which drain to the urinary bladder. Sitting atop each kidney are the adrenal glands, which are easily viewed in the torso model.

*When finished with the dissection*

Remove all dissecting pins, place these with your tools for cleaning. Take the pig and tray to the sink. Leaving the strings on the pig, place it in the tub marked for used pigs. Clean your tray, tools, and beaker, then place them on the cart to dry. Spray and wipe down your work area and replenish all materials for the next lab. Thoroughly wash your hands with soap before handling any other materials.

____ Examine a Torso Model, Locate the Organs, Compare to the Fetal Pig:

Following the checklist on your lab worksheet, find all structures listed for the torso model. You are responsible for knowing all listed terms for the lab practical- many of these are structures already studied in previous labs. Notice many structures, including the carotid arteries, thyroid, aorta, adrenals, and ureters that may not have been found on the fetal pig. Blood vessels are easier to find and identify. The structures and organs on your list won’t necessarily be uniquely numbered or lettered- one to the next, many are the same.

*Attempt to take the torso model completely apart and put it back together correctly- looks easy, but it

can be difficult, as it will only fit together one way.* 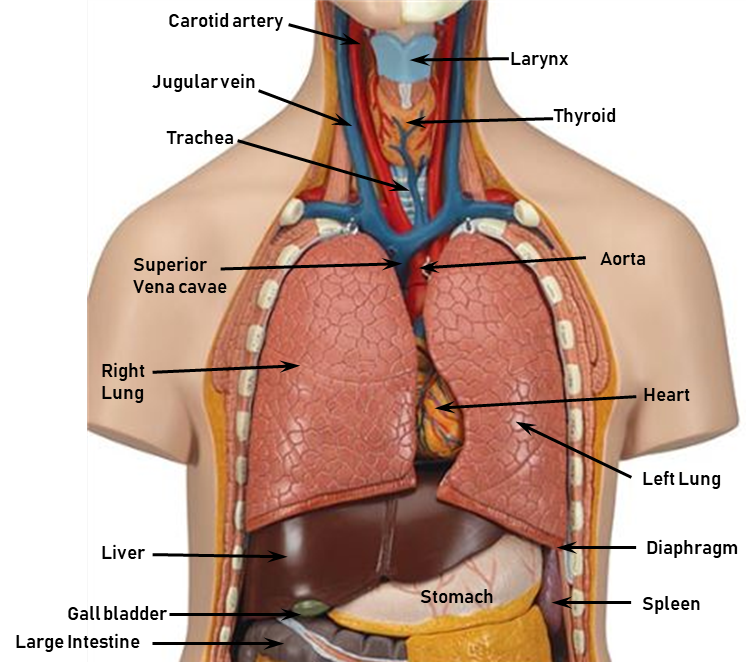 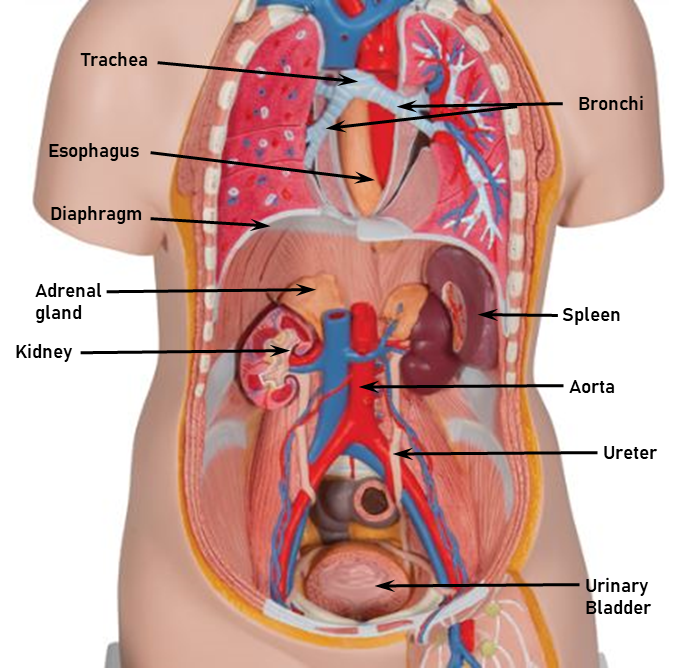 Review Questions- complete using the lab manual, your textbook or other resources.

What two features identify/define a mammal?

What difficulty may occur if the epiglottis was surgically removed due to cancer?

Why is it proper to associate the gallbladder with the liver?

Name two or more internal differences between the fetal pig and the human organs.

List the number / letter of the parts on the torso model. If they are not labeled, find them and put a check mark in the blank. Find the corresponding parts on the pig. Ask the instructor for help.

Check if found on pig (in order of dissection)

_____ Duodenum (part of the small intestine)

*Note: Difficult to find on pig, but often color-coded and easier to locate on torso

What is the function of the following organs/structures? 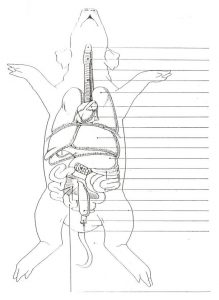 Biology 102 Laboratory Manual: Biology of Plants and Animals by Jeffrey Ray and Jason Jones is licensed under a Creative Commons Attribution 4.0 International License, except where otherwise noted.