In this lab, you will learn the methods we use in the microbiology laboratory to maintain a clean environment and prevent contamination.  These methods will include:

Media comes in four basic types – broths, deeps, plates, and slants.  Plates (also called Petri plates), deeps and slants are all solid forms of media that rely on agar isolated from seaweed to provide a solid growth surface while broths are a liquid type of growth medium.  It is important to note that bacterial cells will have different characteristics when grown on solid versus liquid media.

Colonies are formed only on solid media where cells can form visible masses on top of agar surfaces.  Slants and plates differ in their surface area – slants will have a smaller surface area and a smaller exposure to the environment when the test tube is opened compared to the much larger surface area of plates.  Because plates are the easiest form of media to contaminate, it is important to hold a plate in such as way as to minimize air exposure.  Whereas Petri plates can be used to obtain isolated colonies, slants lack sufficient surface area to achieve isolation in most cases.  Deeps, while a solid form of media, lack the ability to provide isolate colonies because growth only occurs along a narrow inoculation band termed the stab line or slightly away from the stab line in motile species.  It should be noted that deeps will contain an oxygen gradient where oxygen is plentiful at the top at the deep but limited at the bottom of the deep due to poor oxygen diffusion across thick agars.

Growth in broths in indicated by a general cloudiness called turbidity.  Cells may form clumps termed flocculent that are suspended within the turbid broth.  Oxygen-loving cells may cluster at the top of an inoculated broth and form a film on the broth surface termed a pellicle.  Cells grown to saturation – that is cells that fall out of solution and settle in a precipitate at the bottom of tube – are referred to sediment.  Sediment can usually be resuspended by lightly thumping the tube to remix the culture.

Overall, each form of media is used for: 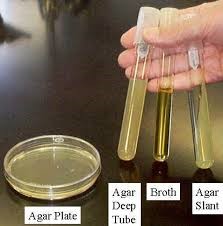 The specific introduction of an organism to a culture media is called inoculation.  Aseptic Technique is used to inoculate media without contamination so that only the introduced organism is studied.  Pure cultures are cultures that contain one organism (e.g., one genus species such as E. coli) while mixed cultures are cultures that contain multiple organisms intentional mixed.  Examples of mixed cultures would include biofilms, most cultures isolated in nature, the human microbiome, and the culture used in next week’s lab. It is important to observe media used in the lab before inoculating it – if any defect or growths are observed on or in media, please ask the instructor to confirm contamination.  Inoculating a contaminated medium will only provide mixed results that cannot be used in the microbiology laboratory.

Before beginning this lab exercise, you should thoroughly wash your hands with warm soap and water and wipe down your workspace with a disinfectant.  If you have long hair or clothing, be sure to tie them back as you will be working close to a flame.

1. Prepare the lab work space by taking out the materials used in today’s lab:

2. Light the candle.  You will want to work near a lit candle so that warm air currents are generated which will help to keep microbes away from your work space.

3. Dip a clean cotton swab into clean water and swab an area that you would like to culture (grow microbes).  Example locations would include the skin behind your ear, a plant, or a pet’s food bowl.

4. Transfer the microbes to the agar by gently streaking the swab across the surface of the agar.  Be sure to hold the lid of the plate over the plate so as to minimize contamination (unwanted growth) from the air.

5. Label your plate with the date and what you swabbed on the bottom of the plate.  You may want to put your plate in a ziplock back (partially sealed) and set the plate aside for a few days to grow.  The use of a ziplock bag prevents the plate from drying out.  Note: Plates are incubated “bottoms up” – that is the plate should be inverted so that the medium is upside down to prevent condensation from dropping onto the medium.

6. Clean up your work area by:

7. After your plate has growth on it, record the growth below in the Results section. 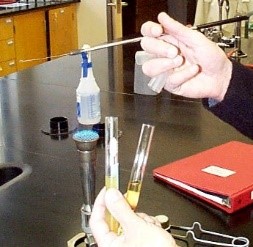 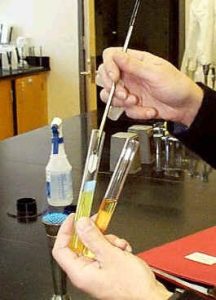 Figure 2 Transfer of a culture from a stock culture (broth) to a broth or slant.  Image source: Prokaryotes (Biology 102). Authored by: Michael J. Gregory, Ph.D. Provided by: LibreText. Locatedat: http://bio.libretexts.org/Under_

Because microbes require time to grow, you will view your results in the next lab period.

Agars: Colony – be sure to include color, if colonies are isolated, and relative size